Weather on Mt Whitney varies greatly during the year and can certainly be unpredictable at times. Temperatures at the lower elevations are generally warm. At higher elevations in the night, even in the summer months temperatures can fall below freezing. Typical winter temperatures above 9,500 feet range from -14 degrees F to 12 degrees at night and from 15 - 50 degrees F during the day.

Ninety five percent of total precipitation (which includes both rain and snow) falls between the months of October and May, with more than half falling in January, February, and March. The frequency of summer showers increase at higher elevations and correspondingly there are more cloudy days. But even though these thundershowers are of short duration they are still a danger to the hiker/climber on the summit or high ridges on Mt Whitney and other Sierra Peaks. That being said, if you detect a thunderstorm developing, vacate the summit and high ridges at once. The first recorded fatality on Mt Whitney was due to lightning.

Snow is one of the most spectacular features in the Sierra Nevada (the second snowiest mountain range on the continent) but due to the fact that Mt Whitney resides in the southern portion of the Sierra Nevada, it does not get nearly the amount of snow pack that the Palisade or Mammoth Lakes region do. 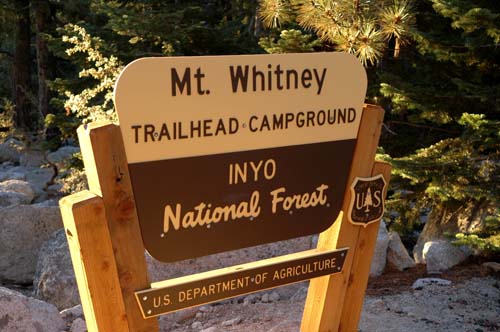 Quick summary of Mt Whitney weather and road access:
Mostly sunny and clear along with cold temperatures except this coming Thursday through Friday where we have a chance of snow showers on Mt Whitney.

Latest Trail Conditions as of November 26th
The trail has a covering of snow above 10,000 feet that is not melting off due to cold temperatures. Winter mountaineering skills are in force at this point in time. Very few people going to the summit. The quota period has now officially ended, so permits are there for the asking.

MT WHITNEY AERIAL VIEW - We are proud to have the following link added to our Mt Whitney lineup. It is a mixed slide-show showing many key features of Mt Whitney and the surrounding areas from both the ground and the air. So click on the following link, turn up the music, use the biggest monitor you got in full screen video mode, and enjoy high resolution photos of Mt Whitney.
Mt Whitney Aerial Slide-show also check out our Mt Whitney Aerial Flight Video (a moving view completely around Mt Whitney and its surrounding neighbors).

TRAIL GUIDE - for an in-depth write up on hiking from the Trailhead at Whitney Portal to the Summit, please check out our page on the Mt Whitney Trail.


THE FOLLOWING IS THE WEATHER FORECAST FOR THE WHITNEY PORTAL AREA AT 8,300 FT
The Whitney Portal Hosts the Trail-head for Hikers, Backpackers and Climbers on Mt Whitney

The Photo Above Shows Trail Camp on Mt Whitney at an elevation of 12,000 ft. Most backpackers/climbers on Mt Whitney use this as a base camp for Summit day. Plenty of great sites already established so it makes for easy setup. From here you will have 2,496 feet of elevation gain left before reaching the summit.

THE FOLLOWING IS THE WEATHER FORECAST FOR WHITNEY Trail Camp AT 12,000 FT
As mentioned above, most backpackers/climbers set up camp here before going for the summit.

THE FOLLOWING IS THE WEATHER FORECAST FOR WHITNEY'S SUMMIT AT 14,508 FT