Shadow Lake / River Trail - Trailhead - is located just past the stables on SR203 (see Getting Started for a more detailed description). The sign off the paved roadway states Agnew Meadows Trailhead, and it is named that because of the immediate meadow that carries that name located just west of the parking lot. But this famous trailhead will give you access to some of the most famous trails in all the Sierra Nevada. 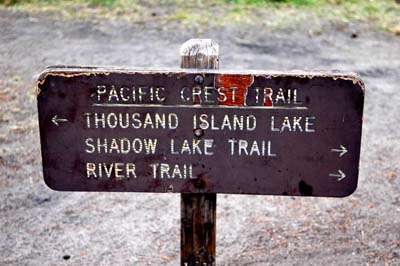 Things can be a bit confusing, because the sign above states that the trailhead is more correctly known as the Shadow Lake/ River Trail Trailhead. But this is how it works. The trail sign in the image to the right tells us that by going left, (or north), you will be able to travel to Thousand Island Lake. If you take this option, you will be on the Pacific Crest Trail.

The Pacific Crest Trail (also known as the Pacific Crest National Scenic Trail) is a long-distance mountain hiking and equestrian trail that runs from the United States border with Mexico to its border with Canada and follows the highest portion of the Sierra Nevada and Cascade Range. which parallel the Pacific Ocean by 100 to 150 miles (161 to 241 km). The Pacific Crest Trail is 2,650 miles (4,240 km) long and ranges in elevation from just above sea level at the Oregon-Washington border to 13,153 feet (4,009 m) at Forester Pass in the Sierra Nevada. 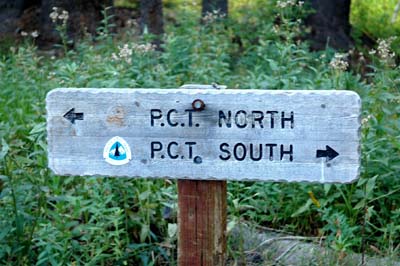 It was designated a National Scenic Trail in 1968, although it was not officially completed until 1993. The Pacific Crest Trail, the Appalachian Trail, and the Continental Divide Trail form the Triple Crown of long distance hiking in the United States. The PCT was conceived by Clinton C. Clarke in 1932; however it was not given official status until the National Trails System Act of 1968. (Info on P.C.T. from Wikipedia)

The Shadow Lake Trail is not encountered until a couple of miles up the River Trail and there you will see a trail sign identifying this fork in the path. If you continue on the River Trail, you will follow the river canyon and end up at Thousand Island Lake. If you take the Shadow Lake Fork, you will of course end up passing by Shadow Lake on your way to Ediza Lake. 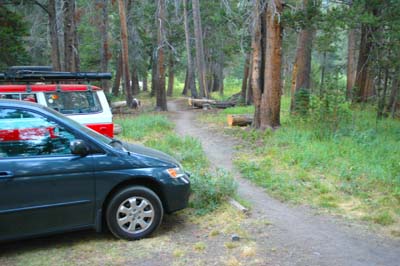 This trail option will also give you access to the John Muir Trail.

The Northern option of the John Muir Trail will lead you to Gannet Lake, Ruby Lake, Emerald Lake, and finally Thousand Island Lake. This is a longer and more arduous path to Thousand Island Lake (in comparison to the River Trail), but it is a much more beautiful route to the lake districts in my opinion.

If your destination is climbing Mt Ritter, Banner Peak, or one of the Minarets, then take the River Trail Shadow Lake option. Then take the fork latter on that ;leads to Ediza Lake.

This is the best way to access the aforementioned climbing objectives. You could also Climb Mt Ritter and Banner from Garnet Lake or Thousand Island Lake, or many other surrounding points, but the Ediza Lake route gives you a more direct approach to the peaks. 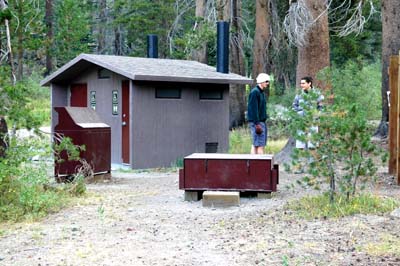 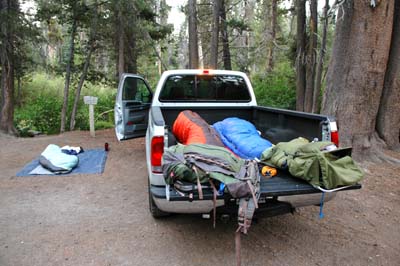 As far as trailhead amenities, there is ample parking in a large flat dirt area near the trailhead. There is also a good size restroom along with bear proof lockers (shown in the image to the left) for your food storage. This way you do not have to leave scented items in your vehicle and take the risk of a bear breaking and entering. It is also your legal responsibility to properly store you food and scented items so that bears cannot get to them. Storage lockers make this easy. There are also bear proof trash cans for your convenience. We usually arrive late at night on most of our Sierra climbing and backpacking outings, and the above trailhead makes it easy to bed down for the night.

By setting up our permit for a Saturday entry and leaving Friday night after work we are able to get the most out of our weekends without having to waste time driving on Saturday. In the photo to the left you can see how we are able to make use of the truck bed and a ground cloth (shown off to the left in the above right hand photo) for sleeping accommodations on Friday night at the trailhead. 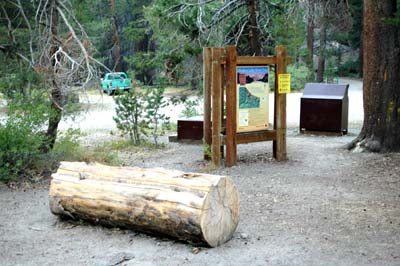 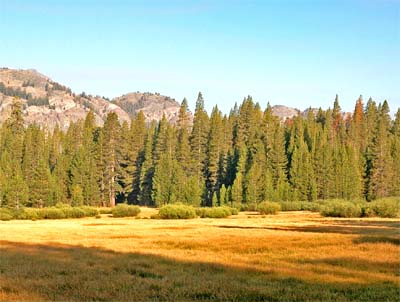 Also try and take some time out to explore the trailhead area. The Forest Service has gone to the effort to post interpretive signs and billboards in order to educate us folks about the rules (shown in the image to the left).

They give good information on things we need to know about wildlife, camping, trail regulations, and other important issues concerning wilderness travel. I find that the more you understand about your surroundings, the more you will be able to safely enjoy your experience in the great outdoors. Just to the west of the trailhead parking area is beautiful Agnew Meadows. The upper right hand photograph shows this popular area turning a golden brown during the latter part of August 2007. 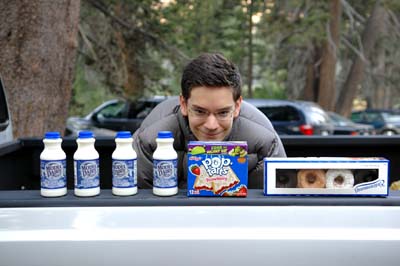 In July 2006 (when we climbed Mt Ritter) this scene was quite different, and the meadows were green and soggy. We also arrived in the night, but our permit entry was for that day, so we had to put on our headlamps and travel down the trail a couple of miles to make our permit legal.

We were glad to get out of the trailhead parking lot because the number of mosquito's was unbelievable. July is usually mosquito season in the Sierra so come prepared with plenty of bug repellent. But in late August the meadow is dry, and we did not encounter a single mosquito on the entire trip.

Along with gaining a day by driving at night on Friday and waking up at the trailhead at first light, we were able to enjoy a continental breakfast. Though I do not endorse pop tarts and donuts for breakfast on a regular basis they can be a real treat in the mountains. The nights are plenty cool at 8,300 feet and the milk was in fine shape for breakfast that morning. I lined up the goodies on the top rail of the truck bed and my son Ben shows his delight in the scene after waking up after a good nights sleep in the back of the truck. For more about backpacking food, Click Here. 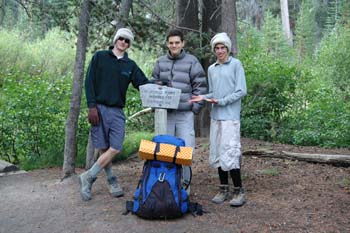 All in all the Shadow Lake / River / Agnew Meadows) Trailhead is your gateway to the endless variety of beauty in the spectacular Ansel Adams Wilderness region.

Ansel Adams Wilderness encompasses 232,000 acres of what some would say is the most beautiful terrain in all the Sierra Nevada. Elevations range from 3,500 feet at the base of the wilderness to the Summit of Mt Ritter at 13,157. With around 350 miles of trails to explore, you will never run out of things to do. The area includes sections of the John Muir and Pacific Crest Trails.

So whether you are climbing an alpine peak, backpacking into beautiful Ediza Lake, hiking along cascading waterfalls and rivers, fishing at incredibly popular Thousand Islands Lake district, or participating in any other outdoor / alpine activity, Shadow Lake Trailhead is your ticket to adventure!

So at this point, please click on the link below and jump back to the top and make use of the side links for more information on Mt Ritter and the surrounding area.