The Summit - of Mt Ritter offers fantastic views of Yosemite National Park to the north, the Minarets to the south, and a complete view of the Ansel Adams Wilderness. Standing at 13,143 feet Mount Ritter is the tallest peak in the Ritter Range that lies northwest of Mammoth Mountain Ski Area. 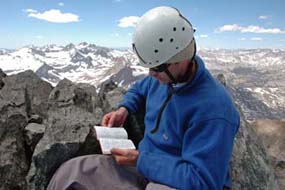 We had a beautiful day on the summit and were able to spend a good bit of time enjoying the crisp thin air and beautiful views of the surrounding landscapes. Climbing Mount Ritter proved to be a great experience.

To the right, you see Eddie holding the summit register and checking out the many entries of people who have climbed Mt Ritter in the past. We added our 2 cents to the book also. Signing the register is one of the perks of making it to the top. In the background, you see the expansive view of the Sierra Nevada. 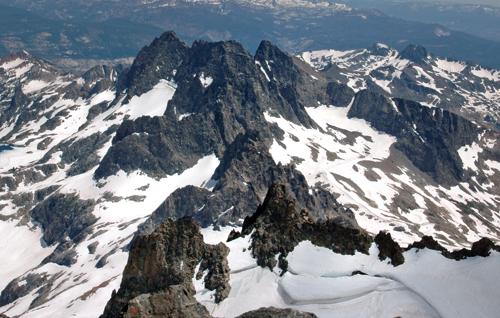 The tallest spire is named Clyde Minaret, after Norman Clyde. Norman Clyde is credited with 130 first ascents of which many were in the Sierra Nevada. He also along with Eichorn, Underhill, and Dawson made the first ascent of Mt Whitney's Classic East Face which brought attention to new technical opportunities in Californian rock climbing. Norman Clyde not only climbed in the Sierra, but he also did quite of bit of climbing in Glacier National Park (11 first ascents there), Grand Teton, Canadian Rockies, etc.

The image to the right captures the view from the summit looking north into Yosemite National Park. In the distant background you can see Mount Lyell, the highest point in Yosemite (13,114 feet). Ritter is just a bit higher at 13,157 feet.

John Muir was the first to summit Mt Ritter, and the following is the way he described being on the summit:

"How truly glorious the landscape circled around this noble summit!--giant mountains, valleys innumerable, glaciers and meadows, rivers and lakes, with the wide blue sky bent tenderly over them all. But in my first hour of freedom from that terrible shadow, the sunlight in which I was laving seemed all in all.

Looking southward along the axis of the range, the eye is first caught by a row of exceedingly sharp and slender spires, which rise openly to a height of about a thousand feet, above a series of short, residual glaciers that lean back against their bases; their fantastic sculpture and the unrelieved sharpness with which they spring out of the ice rendering them peculiarly wild and striking.

These are "The Minarets." Beyond them you behold a sublime wilderness of mountains, their snowy summits towering together in crowded abundance, peak beyond peak, swelling higher, higher as they sweep on southward, until the culminating point of the range is reached on Mount Whitney, near the head of the Kern River." Well, that about says it all when it comes to the beauty of the view from the top of Mt Ritter. For more on the subject of this beautiful peak and the surrounding Ansel Adams Wilderness, please click on the link below and jump to the top and select another topic for more adventure!