Mt Ritter - is the highest peak in the Ritter Range (13,143 feet), and was first climbed by John Muir in 1872. It is a volcanic ridge west of the Sierra Crest, just outside Yosemite's southeast boundary. The Minarets, a set of more than a dozen fantastically sharp pinnacles in this range, together with Mt. Ritter and Banner Peak make for a striking skyline when viewed from the Ediza Lake area. According to Secor, "Mount Ritter is perhaps the most prominent peak in the High Sierra, and can even be seen from certain summits in the southern portion of the range." 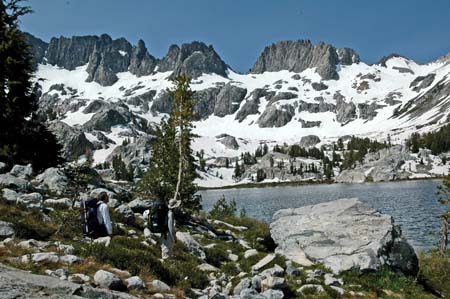 It is easily recognizable (in conjunction with its neighbor Banner Peak) from as far north as the peaks around Sonora Pass, and far into the southern parts of the range, from the Palisades to Mt. Goddard, and some points even further. For high point seekers, Mt. Ritter is also the high point of Madera County, one of the more arduous of the 58 county high points in California.

So before we get into the Climbing Portion of Mt Ritter, we will give you an introduction into the area you will be hiking through in order to get to the base of the climb. As the old saying goes, "half the fun is getting there."

Having spent many years in the Sierra Nevada, I have to say that the Mount Ritter/Banner peaks and surrounding areas, are some of the most beautiful terrain in all the range.

It is of little wonder that John Muir placed this section high on his list of places to visit. He considered Ediza Lake (image to the right) with its spectacular views of the rugged Minarets to be the most beautiful lake in the Sierra Nevada. But Mt Ritter and Ediza Lake are just the beginning of the story, because this area of the Ansel Adams Wilderness is chalk full of things to do, and there are many forks along the shadow lake trail that lead to all sorts of adventures for climbers, fishermen, backpackers and hikers. 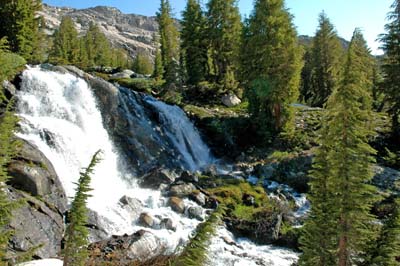 Shadow Creek (shown in the two images above) that runs along most of the Shadow Lake Trail, is more than just a meandering creek, for it produces some of the most beautiful cascades in all the Sierra Nevada. The Creek is a reliable source of water and beauty all year round due to the fact that it receives plenty of snow during the winter months. There are permanent snow fields and glaciers that keep the area lush and green during the warmer months. 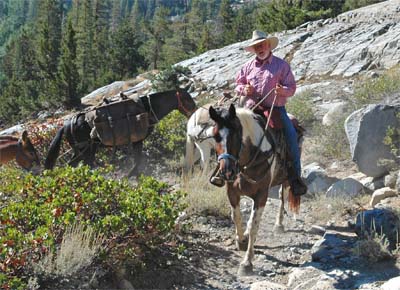 If you don't feel like putting in all the hard work that it takes to explore the back country, you can always hire a pack train to do the job. Dan in the image to the right is on his way to retrieve the gear of a party we saw latter on hiking down the mountain carrying practically nothing. They told us that they were able to enjoy the wilderness for a week (up at Ediza Lake) with luxuries such as gourmet food, lawn chairs with umbrellas, and every other type of amenity you can think of.

Things that would be prohibitive to carry are made possible by taking advantage of this type of service. And if you don't feel like hiking at all, the mules can take both you and your gear to just about any destination in the Sierra. The pack station for the Ansel Adams Wilderness is located near the base of the Shadow Lake Trailhead. 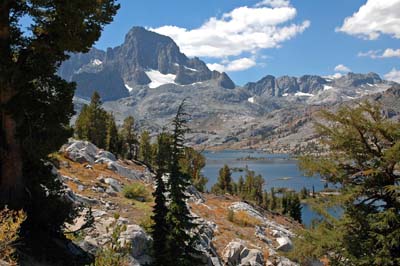 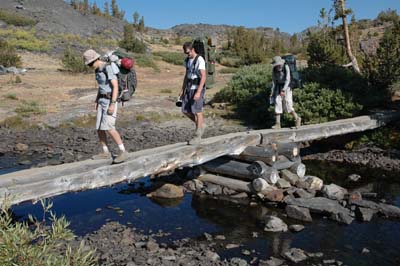 As mentioned in other areas of Timberline Trails, the Sierra Nevada sports a trail system that takes a back seat to none, and the Ansel Adams Wilderness area of the Sierra is no exception. The John Muir Trail, the River Trail, and the Pacific Crest Trail, run parallel through the above wilderness areas , and each (in its own way), shows off unique beauties of this most special of regions in the Sierra Nevada. In the above left image you see Garnet Lake with Banner Peak looming in the background.

Along with the beautiful scenery are cool split log walkways that allow hikers to easily negotiate water crossings and have a bit of fun while doing it. The top right photo shows an example of just one of these little bridges that appear along the John Muir Trail. 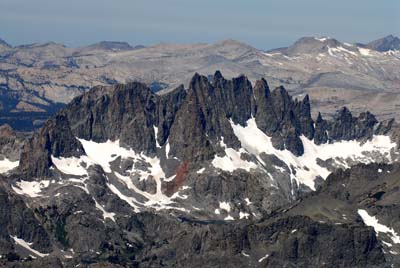 The Ansel Adams wilderness was originally established as the Minarets Wilderness in 1964. The Minarets are a jagged ridge of peaks that some consider as the most spectacular massifs in all the Sierra. The minarets are part of the Ritter range, and make up an exposed roof pendant of meta-volcanic rock that provide a spectacular skyline from both the east and west side of the Sierra.

The photo you see to the left was taken from the Summit of Mt Ritter and is just one of the many sites you will see if you decide to make the climb to the top. In 1984, with the California Wilderness Act, the area was enlarged and the name of this wilderness was changed to Ansel Adams, honoring the famous landscape photographer.

Ansel Adams was born on February 20, 1902 and passed away on April 22, 1984. He was an American photographer and environmentalist, and his black-and-white landscape photographs of Yosemite National Park and other areas of the American West are world famous. Ansel Adams did much to elevate photography to an art comparable with painting and music, and demonstrated with his work that the art of photography is just as capable of expressing emotion and beauty as other more traditional art forms. He told his students, "It is easy to take a photograph, but it is harder to make a masterpiece in photography than in any other art medium." I must say that I agree. In this day of digital photography, it is easier than ever to take thousands of photos, but to get one that is truly spectacular is rare indeed. 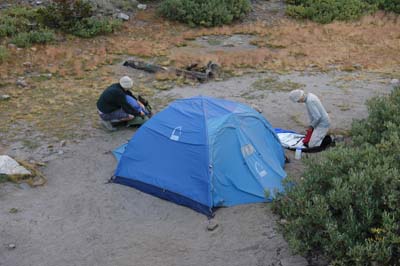 Getting to the base of Mt Ritter for your Climb is a great experience and it is certainly one of the best parts when it comes to climbing Mt Ritter, and there are plenty of fantastic camp sites along the way, but there are areas that are restricted to camping. Sites around Shadow Lake is one of them. You cannot camp within 300 feet of the shore of Shadow Lake.

You also cannot camp within 100 feet of any trail. Make every effort to camp in spot that is free of vegetation or in an established site. That way you do not trample down fragile plants or wildflowers.

It is best if you can get setup before sundown so you will be able to find a nice flat spot. There is nothing worse than groping around in the dark and ending up getting a rotten nights sleep because you had to settle for a site that is not level or one that is full of rocks and twigs that not only have the ability to give you a nice little backache in the morning, but also have the potential to do substantial damage to your tent by poking holes in the bottom of it. 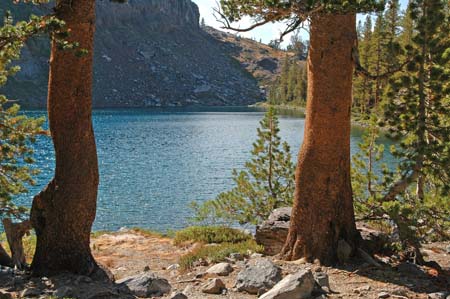 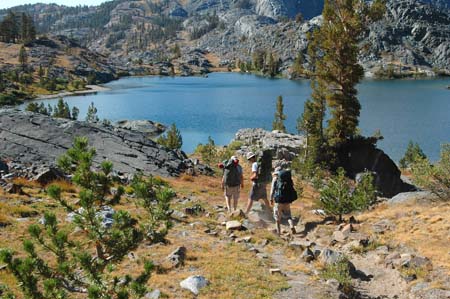 The lakes that line the John Muir Trail in the Ansel Adams Wilderness region are fantastically beautiful. Ruby Lake shown in the above left hand image is both wonderfully remote and peaceful. In the above right hand photo you see backpackers descending to gorgeous Emerald Lake. It is located just southeast of Thousand Island Lake. 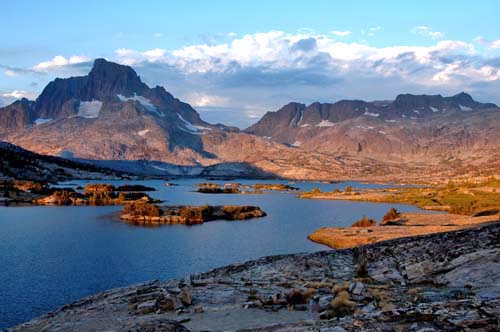 If you are a fisherman, I hear that spectacular Thousand Island Lake area (photo to the right) has some of the finest fishing in the Sierra Nevada. Located near the intersection of the John Muir Trail and Pacific Crest Trail, it is hard to imagine a more beautiful place. You can see majestic Banner Peak at dawn in the left upper portion of the image to the right.

As mentioned above, I would consider Mt Ritter,Banner Peak, and the surrounding Ansel Adams Wilderness region as one of the finest landscapes in all the Sierra Nevada. No wonder John Muir loved this area so much. It is all part of God's wondrous creation. Well, that's about it for our introduction to Mt Ritter and the Ansel Adams Wilderness. For more adventure on Mt Ritter and the surrounding area, just click on the link below and jump to the top to select another item from the side menu.

Many peoples will come and say,
"Come, let us go up to the mountain
of the LORD, to the house of the
God of Jacob. He will teach us His
ways, so that we may walk in His paths."
Isaiah 2:3a