Mountaineering is usually divided in to two styles of climbing. Alpine and Expedition. Alpine mountaineers are usually limited to peaks under 15,000 feet such as in the Sierra Nevada and Rocky Mountains here in the United States, and the Alps in Europe. Alpine climbing is where climbers generally carry their loads between camps, in a single push for the summit. Light and fast is the by-word for the Alpine Mountaineer. 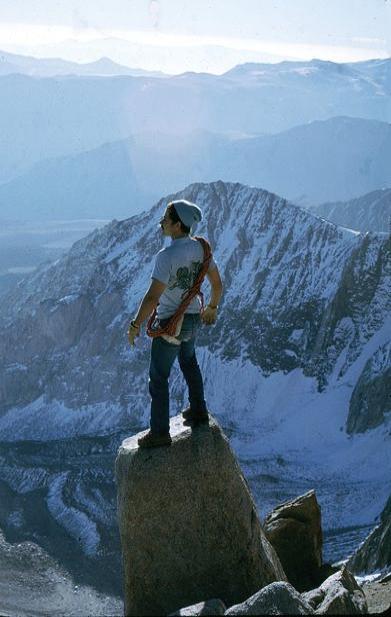 The term alpinism contrasts with expedition style climbing (as commonly undertaken in the Himalayan region or other large ranges of the world), where porters, pack animals, glacier airplanes, cooks, multiple carries between camps, usage of fixed lines etc. are often used methods for this type of climbing. Expedition mountaineering still employ the skill sets of the alpine mountaineer, except for the fact that they often have to deal with even higher altitudes, expanded time scale, longer routes, foreign logistics, more severe weather, and additional skills unique to expeditionary climbing. Alpine Mountaineering can involve several outdoor activities in one. Namely hiking, backpacking, rock climbing, and ice climbing.

Mountaineer's are what I often refer to as Peak Baggers. Their goal is to get to the top of a mountain by any means necessary. Sometimes it only involves a hike, such as White Mountain, while at other times it may involve a variety of activities. North Palisade in the California Sierra Nevada would be just such a peak. It involves hiking/backpacking, snow and ice climbing, and rock climbing, all put together (if you use the North Fork Approach). Mountaineering, for the most part (but not always), is the more committed of the of the above mentioned outdoor activities, due to the fact that it usually involves being located in more remote areas.

The downside to all of this is that if you or someone in your party should get injured (while climbing on a distant peak) getting help could become a real problem. This means that you should mountaineer with other experienced people, because you will be highly dependent on their skills and preparedness if something should go wrong out there.

If you check out all the links at the beginning of this page, you will see examples of all the various types of mountaineering and climbing activities. But no matter what activity you decide to take up, hiking, backpacking, rock climbing, mountaineering, or all of these activities, the most important thing to remember is to be safe out there. Climbing and mountaineering are inherently dangerous, and care must be taken at all times in order to avoid serious injury.

So remember to be safe and enjoy,
Dave French