High Camp on Mt Langley is most often set up in the Cottonwood Lakes area for those who choose to make a two day or more outing for climbing Mount Langley. Even though a trip to the summit and back can be accomplished in one hard day (by those in excellent shape), packing in and establishing a camp in the Cottonwood Lakes area is a much better way to enjoy your experience on the mountain.

There are numerous established sites in the Cottonwood Lakes Basin, and the ones with sandy bottoms (like above) are excellent for setting up tents. They also provide for a very comfortable nights sleep because the sand makes for a more giving surface than the hard rocky soils of other areas. Spending the extra night out also helps with the acclimatization process for going above 14,000 ft the next day, and water is no problem at all, because the lakes are easily accessible. But if you spend one or more nights out in the wilderness, you must carry along a bear proof canister. They are required for storing your food and scented items. They are also extremely helpful for keeping the pesky marmots and other critters out of your food supply. 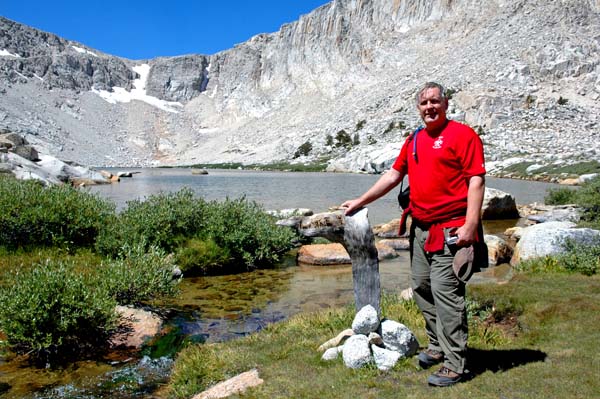 Spending some extra time on Mt Langley by camping out, also allows for greater exploration of the many beautiful lakes and meadow areas. To the left you see Kurt standing at the Lake 4 trail marker with the Old Army Pass in the background (which is located just above the vertical snowfield in the image).

The Old Army Pass is readily accessible via the unmaintained trail that climbs up the steep slope. The photo here was taken on August 21, 2006. As you can see, there is still a remnant of snow left even this late in the year.

In early season (which can often times extend into early July or later in a heavy snow year) getting up the Old Army Pass safely will require ice ax and crampons. It is approximately a 30 degree slope, so the above mentioned gear will be required. But make sure you know how to self arrest. The boulders at the base will most definitely create a very abrupt and possibly injurious end to your slide if you should fail to stop yourself before hitting bottom. 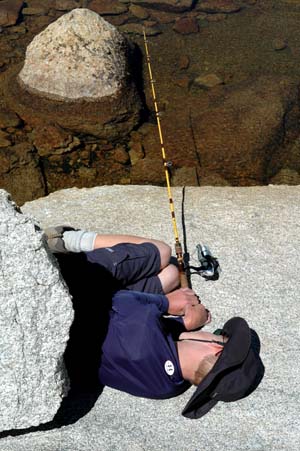 If you like to fish, the extra time will allow you to do so. But make sure you check out the rules and regulations before you start your trip so you know what bait is allowed, and the limit on how many fish you can catch. As noted in other sections of this writeup on Mt Langley, some lakes are catch and release only.

To the right, you see Russ gearing up with his collapsible fishing pole to do a little fishing in one of the lakes above our Lake 3 campsite. His son Kevin to the left is multi-tasking by using his time to both fish and sleep.

Cottonwood lakes is a beautiful area of the Sierra Nevada, and it is well worth planning your trip so that you can spend some time in this area. Taking short walks and just being out and about in this wonderful setting, will also help you acclimate to the altitude for your trip to the Summit of Mt Langley. 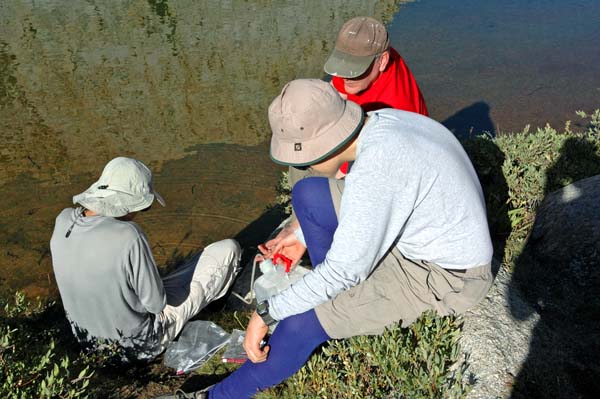 If you enjoy photography, the Cottonwood Lakes Basin affords many opportunities for that also. Early morning provides the best lighting for you shutterbugs out there.

Due to the heavy traffic and use in the Cottonwood Lakes area (including stock animals) water should be filtered or properly treated for safe drinking. In the picture to the right, you see us engaging in this activity. We pumped several gallons of water during our three day visit on the mountain.

Due to the heavy traffic and use in the Cottonwood Lakes area (including stock animals) water should be filtered or properly treated for safe drinking. In the picture to the right, you see us engaging in this activity. We pumped several gallons of water during our three day visit on the mountain.

For much more on the subject of water and it's treatment, we our page on Water/Dehydration. 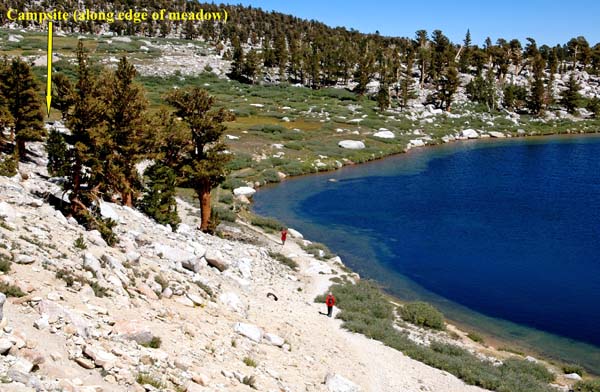 The image to the left is a picture of Third Lake and a marking showing where we camped. Also note the scale of the area by the size of the people in the lower center portion of the photo. For high mountain lakes, the Cottonwood Lakes are pretty good size and there are lots of campsites available everywhere. So if you like privacy, you should not have any problem finding a spot to suit your needs.

We were fortunate to have good weather but this is not always the case. When you are in the mountains, make sure that you always have some sort of waterproof barrier for your tent or bivy bag. Storms can blow in at any time in the Sierra Nevada and you need to be prepared for them. Getting soaked at high altitude can be life threatening at worst and very uncomfortable at the least. I have seen my share of campers in the wilderness that were caught unprepared, and they all vowed they would never be caught without the proper gear ever again. For much more on the subject of cold injuries, please check out our page on Hypothermia. 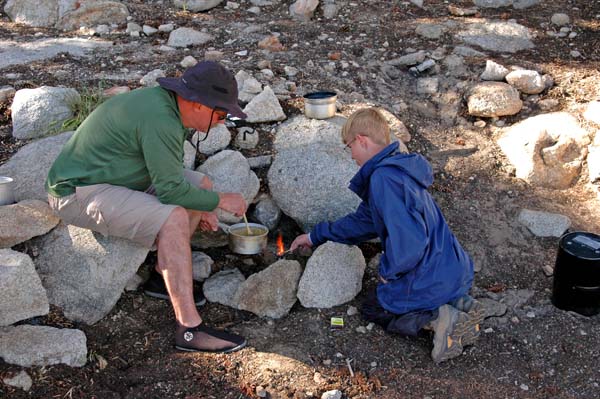 Russ (right) and his son Kevin work on a great spaghetti dinner for the group. Activities such as getting water and preparing dinner help the time go by when in camp, and will also help you to acclimate to the high altitude.

One of the big mistakes I often see people do, is to get into camp early and then crash inside their tent for the rest of the day. Your oxygen intake goes down when you do this, and the result can be dizziness and/or headaches. Staying active during the daylight hours will usually speed up the Acclimatization Process.

This is not only important for feeling good during the day, but even more so during the night. Research on the White Mountain's Summit revealed that once you stop activity and lie down its like being nearly 2,000 feet higher in terms of its affect on the body. So that being said, being involved in light activity during the day rather than resting in your tent, helps a bunch. There will be plenty of time for sleeping later on when it gets dark. 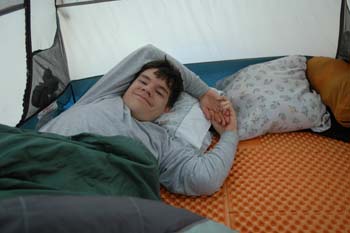 To the left, Ben is all setup for the night in our two man tent. Make sure you always have some sort of thermo pad to place below your sleeping bag. They are critical for keeping the cold from coming up through the ground and penetrating your sleeping bag. We are using Z-pads here for this purpose.

We also usually carry a light weight pillow case for stuffing clothing into. Extra clothing stuffed into these pillow cases make for a very comfortable night out. Just like home! Getting a good nights sleep is vital when your working hard like your are when mountaineering, and summit day is usually the hardest day. But summit day is always my favorite day in the mountains, because it often proves to be the most exciting!

Timberline Trails recommends REI for all your hiking, backpacking, climbing and mountaineering needs. They carry all the major brands and stand behind everything they sell with one of the best guarantees you could ask for in outdoor gear.

That's about it for High Camp on Mt Langley. So at this point, just click on the link below and jump to the top and select another link for more adventure on Mt Langley.