Getting Started on Climbing Mt Shasta - is a matter of getting there first. The mountain is located in the Northern portion of the US State of California. Fortunately, getting to Mt Shasta is fairly straight forward. Super highway Interstate 5 gets you there no matter if you are coming from the North or the South. If you are coming from the East or West, it is still best to traverse over and hit the Interstate 5. Then proceed in the appropriate direction.

Mount Shasta City exit is where you want to leave the highway. You then travel Northeast through the town to Everitt Memorial Highway which leads to Bunny Flat, and other trailheads. For our particular outing on May 16-17, 2009 our starting destination was Bunny Flat at 6,950 feet (3,326 feet above the little town of Shasta).

Once at Bunny Flat, the next order of business is registering for the climb and paying your fees. Summit Passes are required to climb or ski above 10,000 ft in the Mount Shasta Wilderness. A 3-day summit pass is $25.00 per person and is available as a self issue permit at open trail heads and outside the Mt. Shasta city Ranger Station 24 hours a day. It is also available at a variety of outdoor stores in Northern California. Annual Passes which are good from Jan 1 to Dec 31st are $30 and currently only available at the Mount Shasta Ranger Station (Phone# 530-926-4511) and McCloud Ranger Station (Phone# 530-964-2184) from 8:00 am to 4:30 pm Mon-Fri, and at "The Fifth Season" during business hours. In the above header photo you see my son Sean filling out his registration papers at the Bunny Flat station. Each person is required to register and pay an individual fee as mentioned above. 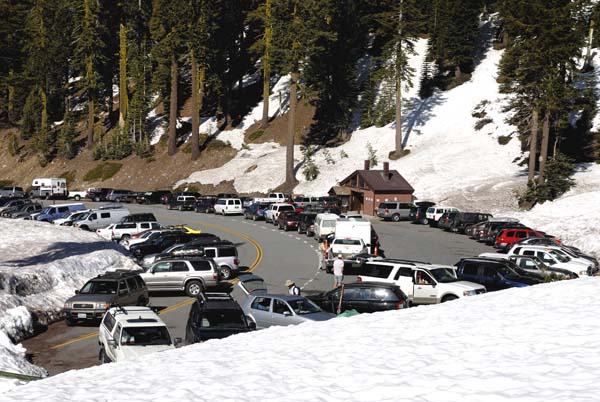 Bunny Flat parking area can certainly be crowded, as you can see in the image to the right. We tried to miss the Memorial Day crowds by climbing the mountain a week earlier, but it seems as though many others had the same idea.

But not all people were setting out to climb the mountain, because there were several folks that came there to snowboard, ski, or just plain enjoy the fresh new snow. Nevertheless, the crowded area forced us to park well down the road in order to get a place to put our vehicle for the weekend. Under the above conditions, we found ourselves in the snow as soon as we left the pavement, and rarely saw any soil until we returned to this area a day later.

On a positive note, the snow cover gave us direct access to our midway camping spot at Lake Helen. It made it so we did not have to wind around on a trail that only becomes useful later on in the year. Trails provide quick access to destinations, while cross country travel through rocks, branches, and other such obstacles requires extra time and energy. On our trip we had good snow cover and all the above mentioned problems of cross country travel were no problem at all. The ample snow cover provided a smooth path over them. 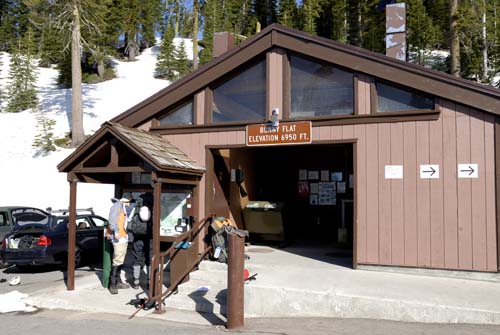 The structure at Bunny Flat shown in the left hand image also houses a couple of rest rooms. A barrel of toilet bags is also available here. All back country travelers are required to pack out their solid waste these days. Multitudes of visitors on the mountain have forced this mandate. When you see the number of people visiting the mountain terrain, it becomes obvious that human waste needs to be controlled so that future visitors will be able to enjoy a pristine environment. The station also provides a place to discard your bags after you return from the mountain.

There is a total of nine hiking trails on Mount Shasta. Two of the nine trails begin at Bunny Flat, which is located 3 miles from the Everitt Memorial Highways end. The two trails are the Horse Camp Trail and the Green Butte Ridge Trail. We went cross country in the snow to get to Horse Camp Hut, but in later season the Horse Camp Trail is the way to go. The Green Butte Ridge Trail is a beautiful trail that will give you very scenic views of Mt Shasta. Everitt Memorial Highway is the only paved road that gives access to Mt Shasta. Bunny Flat is the high point along the road, and if you are just out to get some great photos (with just a bit of a hike), you can get some great shots of Mt Shasta. The below left hand photo was taken after hiking less than two miles from Bunny Flat and gives you an idea of how beautiful the scenery is on Mt Shasta.

The photo to the above right was taken near the trailhead, and the signs are a final reminder of the requirements for traveling above 10,000 feet on Mt Shasta. Be sure to carry you registration and Summit Pass with you at all times. US Forest Service Rangers are ever present on the mountain, and you will very likely be asked to present your paperwork. We did. So keep it handy for inspection.

For real time web cam of Mt Shasta from below, click here.

Good planning always pays off, and the more information you have available to you when it comes to planning your outing on Mt Shasta the better.
CLIMBING MOUNT SHASTA - Additional Information and Tips

For much more on Mt Shasta, click on the below link to go back to the top of the page and check out some of our other links on the side menu bar that will take you to additional adventures on Mt Shasta.